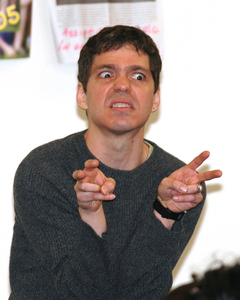 Scott Ainslie will showcase his educational concert, Before Rock ‘N Roll, at Ohio Arts Presenters Network conference October 18th. Click for a preview of the concert before a group of students.

Update on Hobey Ford’s newest production, Sea Song, The story of a boy's discovery of the natural world at the seaside. This production follows the life cycle of the sea turtle and the fragile interwoven environment of animals living at the edge of land and sea. Sea Song is performed in the style of Ford’s Animalia series featuring his beautiful carved foam animals performed in full view of the audience. Sea Song is a nonverbal story supported by the beautiful music of David Kukhermann's hang drum. https://youtu.be/T_VuqwK92VM The production will be ready for touring by Fall 2017; for more information.

Jason Ringenberg’s Lost and Found album with Jason and the Scorchers was recently named one of the top 50 Best Alternative Country Albums of All Times by Paste Magazine. While the Scorchers still perform, these days Jason often performs solo both for adults and with his Emmy Award winning children’s project Farmer Jason.