NEW SHOWS
Hobey Ford’s Golden Rod Puppets: Sea Song is the story of a boy's discovery of the natural world at the seaside and the fragile interwoven environment of animals living at the edge of land and sea.
• Kennedy Center Partners In Education 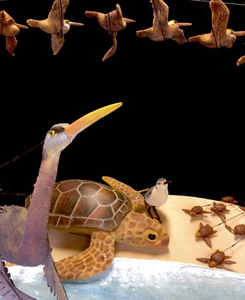 Roger Day’s Two New Concerts: Zookeeper in the House and Invincible! Zookeeper In the House is an original concert developed in conjunction with Birmingham Zoo, celebrating the unsung heroes that make the zoo a fascinating place for children to learn. The Zookeepers! This concert has a multi-media version for school audiences.
Invincible! encourages and empowers young super heroes everywhere to solve the problem and save the day by using the greatest super power of all: IMAGINATION!
Paul Taylor’s Planetarium Show: Aboriginal Skies: In the Land of the Lightning People: Developed in collaboration with Fiske Planetarium, Aboriginal Skies is a 60 to 90 minute planetarium performance presentation adaptable to all. The performance is a unique illumination of the world's oldest living culture in story, song, dance and didgeridoo with stunning rock art and land that links directly to the wondrous southern night sky.

NEW COLLABORATIONS
Reggie Harris and Scott Ainslie with Long Time Comin’: Harris and Ainslie seamlessly weave together spirituals, songs of the Underground Railroad, Civil Rights anthems, work and slave songs, blues, and personal material as they lay out a collaborative history that carries the audience from the depths of slavery to the heights of freedom.
Abraham Jam with David LaMotte, Billy Jonas, and Dawud Wharnsby: "A Muslim, a Christian and a Jew walk into a concert hall...." For real! Abraham Jam is a concert dedicated to fostering dialogue, understanding, and celebration among folks from the three "Abrahamic" faiths.
pdf
2017 - 2018 Roster (pdf)